BORIS BECKER SURPRISED BY DJOKOVIC COACHING APPOINTMENT BACKLASH: ?I must have stepped on many toes in my life?

25 years after winning the US Open, Boris Becker is back on the ATP tour, as coach of the world?s number one player Novak Djokovic. Speaking to CNN?s ?Open Court?, six-time Grand Slam winner Becker talks about his unexpected return to the court, in an interview to be broadcast on CNN International tonight, at 1730 BST. Becker tells CNN?s Don Riddell about the call from Djokovic, the decision to go back on the road, and his surprise at the public?s reaction to his appointment as the world number one?s head coach. He also talks about his relationship with Djokovic, as well as Djokovic?s loss at the Australian Open quarter-finals, and his victory at Wimbledon.

Well I had a couple of phone calls -believe me the last couple years from a few players -but I didn’t think I was ready. I have a pretty successful second career which has nothing to do with tennis and nothing to do with sports. I was already on the road so many years – why bother?

On getting the call from Novak Djokovic:

When Novak called me in October, I was honored and I appreciated the fact that he remembered me and remembered that maybe I could bring something to the table that he doesn?t have yet. I considered going back on the road -but I wanted to talk to him first to see how much his drive is.
I am not going to spend weeks and weeks on the road and don’t see my wife and kids if it’s not worth it.

On why he thinks Djokovic reached out to him:

Well I was known to be a pretty hard-nosed guy on the court. I put all my character in a match.
And maybe that’s something that he was looking for.

On the backlash surrounding his appointment as Djokovic?s coach:

Yeah a little bit strange ? a little bit surprised. I wasn’t aware I had that many doubters. I must have stepped on many toes in my life for all of them to come out of the bushes and raise their opinions. We live in a free world –everyone is entitled to their opinion but I was a little surprised. I mean I like to think now I am very comfortable within the tennis community ? I know a thing or two about the sport. This is a part of sometimes being Boris Becker, being so much in the front row of life ? so much in the headlines all the time that a lot of people feel like they are entitled to their opinion even though they have no idea about me.

On how he would describe the first few weeks working with Djokovic:

He’s a great student. For someone who has won so much already -being number one, a multiple grand slam winner, a very rich man – he really wants to learn, he wants to get better -he wants to be in the history books of tennis.
Yet he is very hard-headed. He is very convinced about his way. He should be – so some of the conversations weren’t that easy. Were not easy.
But sometimes I have a different point of view so it’s up to „my magic” to find a way to convince him.

On struggling to keep his cool in the player?s box:

On Djokovic being beaten in the quarter-finals at the Australian Open:

Well from a tennis point of view he lost to a guy called Wawrinka 9-7 in the fifth set who ended up beating Nadal in the final so he didn?t lose to any slouch but obviously the critics had a field day – ?yeah yeah he?s beaten the three time defending Champion. Now Becker is on board he is losing in the quarter-final?. Well first of all did you see how he lost the match and against who he lost the match? This guy from Switzerland is actually number three player in the world today or number four. So you know he knows how to play tennis. But that was to be expected. You can?t win all the time and you can?t please them all the time.

On the final at Wimbledon 2014, when Federer came back in the fourth set:

Well that was a nightmare quite frankly.
I was a little bit worried to say the least. I thought that Novak was on the ropes -Roger did another „Roger?. I expected a tough match – it didn?t have to be that tough but I expected a tough match.
It felt like I came around full circle. I truly love Wimbledon, I love the place – it is giving me everything that I am today. And it felt right to be coaching Djokovic and it felt right for him to win.

On how it feels to be back in the tennis game:

It feels like something I haven’t felt in a while. Yet at the same time -whatever happened at Wimbledon has passed. I want to think what’s going to happen at the U.S. Open.
It’s a struggle sometimes and it?s a fight sometimes – but if it were easy -anybody could do it! 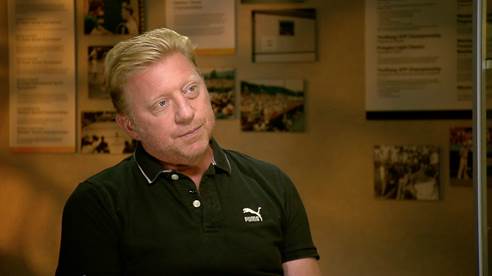