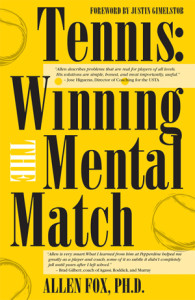 The „Golden Rule” of tennis is the one simple rule that, if followed, will keep you out of more trouble than anything else. It is:  Never do anything on court that doesn’t help you win. Granted, it sounds absurdly obvious, but few people consistently follow it. Adhering to this rule requires one to test any action before taking it with the simple question, „Will this help me win?” If the answer is not yes, don’t do it.

The great players rarely lose track, at least at some level, that the object of the game is to win the match. The average player, by contrast, often seems mindless of this elementary fact. Yet even professionals get caught up in the emotions of the match on occasion and forget.

A truly bizarre example of what can happen was provided by my friend, Jeff Tarango, a brilliant, funny, Stanford-educated tennis professional at Wimbledon in 1996. Tarango, then 26 years old, had never before won a match at Wimbledon. But this year he was in the third round and had an excellent chance of reaching the round of 16 because he was playing Alexander Mronz of Germany, whose name in the tennis world was hardly a household word.

During the match Tarango hit what he thought was an ace, but it was called a fault. While fruitlessly trying to convince the umpire to overrule the linesman, Tarango was heckled by the crowd. Angrily he told them to „Shut up.” The umpire gave him a code violation for „audible obscenity.” Although it only amounted to a warning, this so infuriated Tarango that he demanded the referee supervisor come to the court. The supervisor came and ruled that the warning would stand. Now enraged, Tarango called the umpire „the most corrupt official in the game” and was promptly assessed a point penalty for verbal abuse, costing him the game. At this Tarango blew his top, shouting, „That’s it. No way. That’s it.” He picked up his bags, stalked off the court, and entered the history books as the first player in the Open era to default himself at Wimbledon. To make matters worse (yes, it’s always possible), Tarango held a press conference at which he justified calling the umpire „corrupt” by accusing him, on the basis of hearsay, of having, in the past, „given” matches to players who were his friends.

Let’s tote up the damages. First, Tarango threw away an excellent chance to advance in the tournament since he was, after all, favored in the match. Second, he was defaulted in his mixed doubles, which did not endear him to his partner. Third, it cost him, in fines and lost additional prize money, an amount estimated to be in the neighborhood of $50,000, a considerable sum to a player who was not one of the stars of the game. Finally, his public image was not enhanced by making himself look like an overgrown brat who would have been well served by a few good spankings as a child. All in all it was not one of Tarango?s better afternoons, the object of the game (to win the match) having apparently slipped his mind.

With all these damages accruing as a result of his actions, one might reasonably wonder how a man of Tarango’s substantial intellect could have so completely lost track of his obvious goals? The answer is that his actions were driven by fears of failure (he was losing), exacerbated by the accumulated stress and emotion of the situation. Quitting was his unconscious way of escaping from an excessively stressful situation that he feared would end badly.

If you don’t believe this, picture the following thought experiment: God appears over Tarango’s shoulder and whispers in his ear that he is guaranteed to win the match. Now, what would Tarango have done? He might still have fought with the umpire, but I would bet a lot of money that he would not have left the court and defaulted. (For honesty’s sake, I must confess that during my playing career I did some things in tournaments that were almost as counterproductive as Tarango’s actions. Under sufficient pressure, all of us are quite capable of making some very emotional and foolish decisions.)

The great champions are different. John McEnroe had a similar fiery temperament, but his situational judgment was better. He could usually remain somewhat rational even in the throes of emotionality. Because at some deep level he sensed he was going to win, he could comprehend where the line demarcating disaster was and control  himself just well enough to avoid crossing it. He got into emotional twits where he made unreasonable demands, berated umpires, and threw matches into confusion, but he usually benefited from this. He intimidated linesmen into giving him the benefit on close calls, put his opponents off their games, and stimulated himself with adrenaline and often (but not always) played better.

One year he did manage to get himself defaulted in the Australian Open, but he said later that he had been unaware of a recent rule change where the authorities had cut down by one the number of abuses a player was allowed before default. The progression had formerly been „warning,” „point penalty,” „game penalty,” „DEFAULT,” but this had been changed to „warning,” „point penalty,” „DEFAULT.” McEnroe simply miscalculated and thought he could afford one more penalty. In contrast to Tarango, McEnroe may sometimes have looked like an irrational wild man, but all the while he was carefully counting his penalties so that he could stop himself before he went too far. McEnroe didn’t often forget his own best interests.

McEnroe was cunning in other ways about expressing his frustration and anger. He knew cursing umpires would lead to code violations. So instead he would say things like, „You are so low that words can’t describe how low I think you are!” Of course this is every bit as insulting and hurtful as cursing, but it made the code violation difficult to pin on him.

We are not as rational as we should be. Too often our emotions drive our actions while our reasoning abilities are relegated to the back of the bus. This is especially common in tennis because it is an inherently emotional and stressful game. Errant emotions during match-play tempt us to forget our objectives (winning the match) and immerse ourselves in anger, personal antagonism, defeatism, excuse-making, or other counter-productive but stress-reducing mental states. Keeping in mind our Golden Rule test of „Will this help me win?” can ward off such debilitating and destructive mental states.

The goal orientation of the „Golden Rule” also holds for practice sessions and social matches. In practice your goal is simply to improve your game and fitness. If you are not hitting the ball up to par, keep in mind that performance doesn’t matter in practice. You are simply trying to improve your skills and stay in shape. Becoming frustrated because you aren’t playing as well as you think you should is totally counterproductive, wasting some if not all of your time on court. And in social matches keep in mind that friendships and good feelings are major reasons you are on court, so don’t let your competitive fires get out of hand.

Consider the example of Fred (we’ll call him) who sometimes manages to overlook the „Golden Rule” in both situations at once. He plays and drills with his wife, who happens to be an excellent athlete. Fred, though extremely intelligent, successful in business, and highly motivated, is not a gifted athlete, and this is an area of substantial insecurity and frustration for him. When his wife overpowers him on court, Fred is overwhelmed by raging frustration and competitiveness and sometimes responds with outbursts of hostility and aggression. The aggression is verbal rather than physical, and when they get home afterward Fred apologizes profusely and feels mortified and guilty. But the damage has been done. His wife is kind and forgiving, but Fred?s harsh treatment on the court cannot help but damage the relationship, and sooner or later, directly or indirectly, he will pay for it.

This is the ultimate negative consequence of forgetting the „Golden Rule.” Fred wounds the most important person in his life simply because she is getting the better of him in a meaningless tennis game! This is the height of imbalance, but uncontrolled emotions are not interested in balance. They are interested in satisfaction.

Adhering to the „Golden Rule” is often problematic, on the court or off. This is because our emotional systems fire up more quickly than our logic systems, and we will generally react before we can think about the consequences of our actions. Hopefully, this warning will help you take the time to consider consequences and avoid the worst of an emotional reaction.