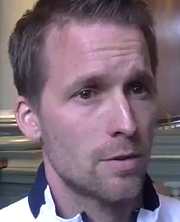 We have known each other for many years and we have a good chemistry between us. It took some time for me to realize how I have to work with Jerzy and what kind of coaching approach I need to have to help him to get his potential out. Jerzy has a special character, which is his strength in tennis and that’s also partly why we created him a special, little bit unique game style. We have spent lot of time together. We shared a room for many years and we have eaten meals together thousands of times. I do not know if there are too many coach-player relationships as close as our is. We can talk about everything and there is a special bond between us. We often even know what the other one is thinking of, or what the other one will say next.

What are the goals you set up together for the season 2014?

The goals are based on his game style. We do not talk about ranking goals almost at all. Last half a year the goals have been to make him healthy enough to play tournaments and we didn’t have opportunity to work on his game that much. I truly hope Jerzy would stay healthy now and we could get back on track improving his game.

Recently Jerzy had two bad looking injuries. The first one happened just before US Open 2013 (he missed Davis Cup rubber with Aussie team) then the problem with foot. Do you have plan how to avoid somehow these kind of difficulties in next period?

Unfortunately injuries belong to sport. Players put their body on tough test on tennis court, gym and traveling around the World. It would be strange if the body wouldn’t react to it time to time. Jerzy has full time physio traveling with him now in hope of keeping his body healthy a bit more. There will be more injuries no matter what Jerzy would do. Lets just hope not as many as Jerzy had lately though.

Last year semifinal of Wimbledon was second turning point in Jerzy’s career. What was the influence of that result on his game?

Jerzy has the game to beat anyone in the World on given day. He was confident, healthy and he played well at Wimbledon. Jerzy has the big game which automatically can bring big results. Simple as that.

What are the goals for Jerzy in two year long term perspective?

We need to make Jerzy’s game more solid all around without losing his game style and natural instincts. He needs to learn to build the situation better, get rid off stupid errors and work on the right shot selection. Top of that he has the daily work that needs to be done as working on short balls, variation of serves, lenght of the return, reaction time, etc…Jerzy’s game style is all about him. It is mostly about Jerzy winning or Jerzy losing. It is not so much about the opponent. Jerzy has the key to win every match he plays and I love that. He has the character, the game style and the weapons to take the control of the match. His game is still not exactly there yet but we also lost last 6 months with injuries. I do believe if Jerzy will stay healthy we might see things come together in a near future.