Interview with Younes El Aynaoui – former professional tennis player from Morocco. Five-time singles winner on the ATP Tour. He reached his career-high singles ranking in the world #14 in March 2003, at the age of 31. Part of the great Davis Cup team combined also of Karim Alami and Hiszam Arazi. 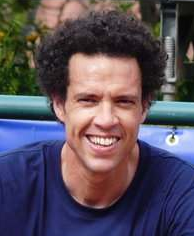 You speak 6 languages. Arabic, English, French, Italian, Portuguese, Spanish. When did you learn them and how it is possible to have so big talent not only for tennis but also for languages?

Yes, most of them I learn by traveling around the world. Nobody spoke arabic on tour, so to communicate I had to speak the other languages to players. Spanish I learn when I was leaving for 8 years in Spain and also had an Argentinian coach for a few years. My mother is French, so it?s my second language. Learned italian by talking to people, even if I didn’t know the language that good, I was trying.

You were in Nick Bollettieri Tennis Academy for two years (1990-1992). We found information that you were working hard to pay for your stay there. You drove the bus, cleaned the gym, watched kids in their room, strung rackets, tossed practice balls to campers, and helped to babysit younger players.  What can you say more about this period in your life? What?s your memories? Maybe some funny story from that time in Florida?

It was good and difficult at the same time. My parents could not effort my stay there, so I had to work a lot, but at the same time it was a great experience for me and I met some very good people over there, they became a good friends of mine! I had a chance to see a great players as well. And I learn a lot from that time. Funny stories… when I drove the student bus and I had no license :))) Once, Agassi needed a hitting partner at 10pm, so they called me and during the practice at 6-6 he just left the court…

Please tell about your foundation.

My foundation is developing tennis in Morocco. We want to make tennis accessible to pure neighborhood all over the country and make it more popular. Help the kids to make their dreams come true. 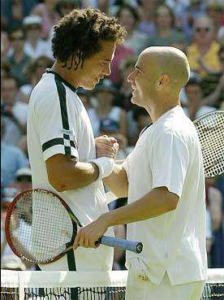 What is going on right now about tennis in Morocco? Any perspective players?

It’s a big interest in general from population in Morocco, but not very accessible yet, more for elite people. The country has a lot of expectation since we had a very good and strong Davis Cup team previous years. Now Moroccan players we have, trying to be based somewhere else. Like Spain, France etc.

What is the future for tennis in Africa in general? Any prognoses?

Big physical potential, but not enough resources to the youth.

What are your activities?

I collaborate with federation, working for Minister of Sport as an adviser. Also advise one Erfurt club in Germany, for which I was playing many years and the owner is my very good friend. But most important is learning to be a good dad for my kids!

When you exactly finished your professional tennis career?

You have three sons. Do they play tennis?

Which match from your tennis career you remember the most?  Which one was your biggest success?

Quarterfinal in Australian Open against Roddick.

Could you please tell some funny story from your career?

Once, me and Goran (Ivanisevic) we were in Germany and stayed in the hotel on the 10th floor. We had a bet: that I will not throw his fancy shoes out from the balcony, which I did:) so I had to go and pick them up in the garden. While I was doing it, Goran wanted to joke and scare me by throwing the empty bottle in the garden from the balcony. And it hit me right in the head! So, when I came in the room, my head was bleeding all around… 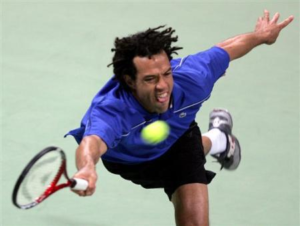 You were member of ATP Players Council. Tell us something about this.

I’ve been a member for 10 years. It was a great chance to be in the first lane of all what happening and be a part of organization. Even do I think it’s a shame that the tour is ruled by tournaments directors, not enough players are making money. Only 150 men can make a leaving from tennis, which I think is ridiculous!!!

Which player from your career you can describe as difficult to play with and why?

Federer. We played 5 times. I won 1 match and lost 4 . He is a great player. Very good behave on court and off court. Great personality and perfectionism, what else I can say about him 🙂

Your life idea for living is?

No aggression or anxiety, spending time with your love ones and thanking the Lord every single morning when I open my eyes.

Person in the world you most admire.

The sportsman in the world you most admire or admired?

Motocross, moto in general! Surfing  and playing with my kids.

If you could have change something in you tennis career from the perspective of time what it would be?

Maybe hire a physical and tennis coach a little bit earlier in my career, if I could effort it before.

What?s your impressions and thoughts about current situations in the world of tennis?

It’s nice to see more new players now playing big finals and not only Federer – Nadal finals. Tennis changed a lot for the last few years, it became more aggressive, more powerful. Less tactical but only playing faster and faster than the opponent!! The entourage is much bigger. You see player with 3 or 4 people around the best players now which I think limit the friendship. During the old days many guys were travelling alone.

Why tennis? Tell us what was going on before your stay in Florida when you were 18 years old?

Me and my brother we started to play together. He is 2 years older than me, so he played better and I was lucky to play with him at that time. Tennis courts were not so far from our home in Rabat, so we played after the school. But at that time in my family nobody really believed that tennis will take such a big place in my life and that I will make a living from it.